This is the most popular of all routes up Kilimanjaro, chosen by around 50% of all trekkers. If we had to describe the Machame route, also called the ‘whiskey route’, in 1 word it would probably be ‘incredible views’. OK that’s 2 words but you get our point! It’s not an easy route, as you’ll need to ascend the Barranco wall and be fit enough for the rather steep summit attempt. Technical climbing skills are however not required, making this route still accessible for anyone in good physical condition. So let’s go on an adventure along what probably is the most beautiful route to the summit of the highest mountain in Africa!

Like we said, this Kilimanjaro hike can be completed in 6 or 7 days. Below you’ll find the 6-day itinerary. We’ll explain the difference for the 7-day itinerary under day 4. Remember, we only recommend the 6-day trek if you’re a very fit mountain climber with some experience.

We pick you up at your hotel in Moshi and drive about 1 hour to Kilimanjaro National Park. You’ll sign in at the Park Office and start hiking through the rain forest. Chances of rain are quite high all year long, but lots of animals can be found in this area, like the black and white colobus monkey.
Your first trek is a long one, taking around 6 hours to complete. When you arrive at your first destination, Machame camp, your porters will have already prepared your tent and the cook will be making dinner. The camp’s located near the border of the rain forest and the low alpine zone, and temperatures can already approach the freezing point here during the night.

The first part of your trek today will take you through moorland, over a trail that’s relatively flat. You will walk for about 4 hours in the morning. After lunch, it gets steeper again, and this continues until you reach the Shira plateau after another 2 hours. The landscape becomes more and more open and on the last part of your hike you’ll be able to enjoy the views on the east, and see the Western Breach with its breathtaking glaciers. Arriving at Shira plateau you’ll get the first glimpse of Kibo in the north-west and Mount Meru in the East, a view that’s particularly breathtaking at sunset.
Your evening and night will be similar to the night before, although it gets colder with temperatures dropping well below the freezing point.

Today you hike from Shira camp for about 5 hours to the Lava Tower as the landscape becomes more and more rocky. At this point you might start experiencing the first symptoms of altitude sickness, like headaches and breathlessness. It’s definitely a difficult day, harder than the two previous ones.

After lunch you descend by more than 650 m / 2150 ft through the magnificent Barranco valley to the Barranco camp site, bringing you to nearly the same altitude as at the start of the day. Climb high, sleep low. This is great for acclimatization, and is very likely to hugely increase your chances of making it to the summit.
You overnight on the Barranco camp site, where stunning sunset views of the Barranco Wall await. 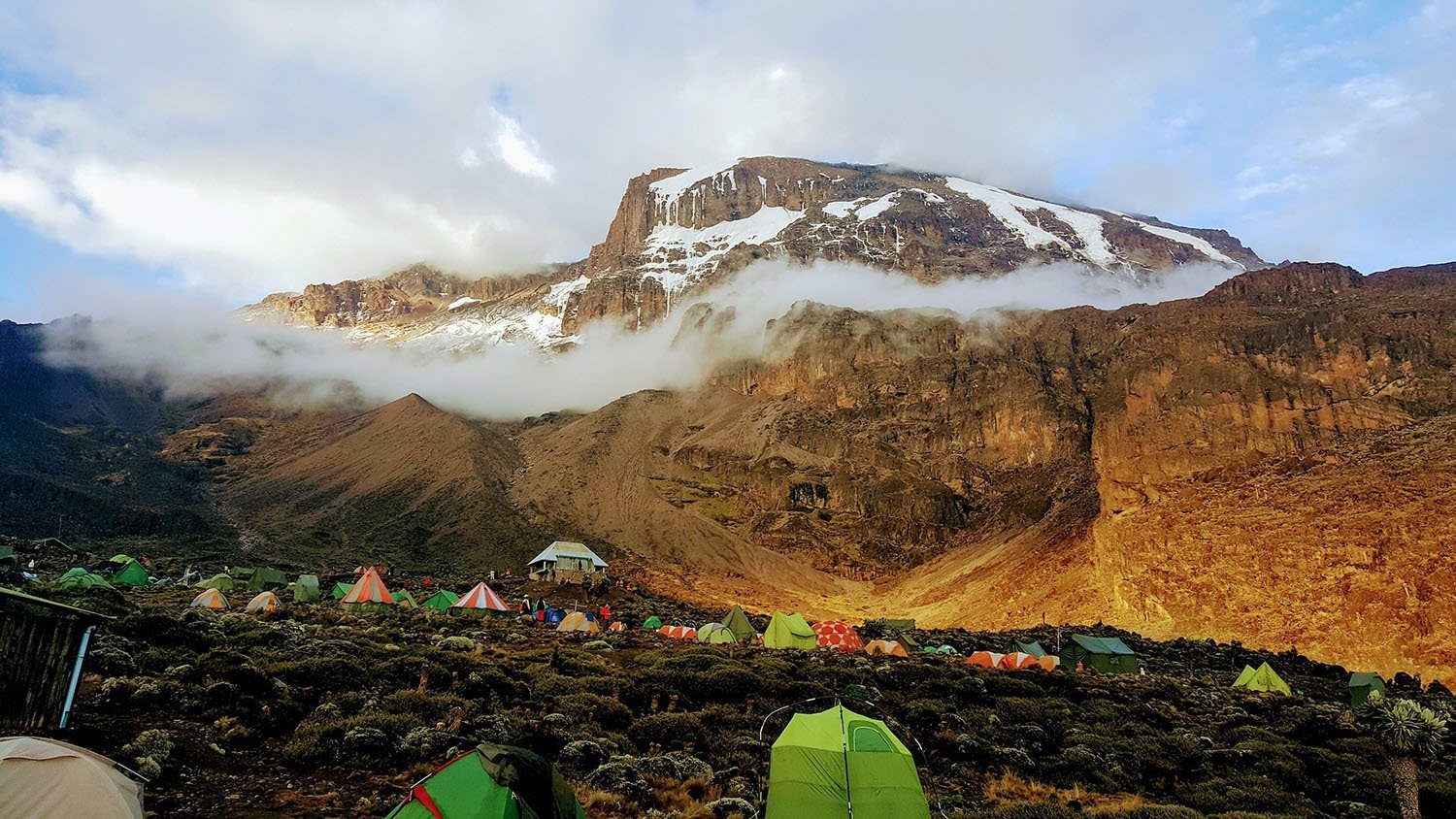 You’ll start the day by conquering the Barranco wall, a 257 m rock facade for which you’ll need some basic climbing skills. Previous experience is however not required, as long as you’re in good physical condition, you should be able to do it. There you’ll start hiking through the Karanga Valley, over a path that goes up and down the whole time. You have lunch at Karanga camp, after which you continue hiking to Barafu camp.

You’ll arrive here between 4pm and 5pm, get some food and head to bed, as you’ll start your summit attempt later that night. Prepare your equipment and get as much sleep as you can. Tomorrow’s going to be a long, but rewarding day!

You hike to Karanga camp on day 4, and continue to Barafu camp on day 5, having an extra night at Karanga camp. Both hikes only take half a day, meaning you’ll have 2 afternoons to do some extra acclimatization hikes. We strongly recommend this extra day to get better adapted to the altitude, especially for inexperienced hikers that are not in excellent shape.

Today’s adventure starts right before midnight, as you head out into the night and start hiking towards the summit. The trek up Kibo is hard and slow, and this is definitely the hardest part of the trek. After about 6 hours you’ll reach Stella Point on the crater rim, at an altitude of 5739 m / 18838 ft.
The summit lies another 156 m / 511 ft higher and the hike up there takes about 2 hours. You’ll take a brief rest at Stella Point before making your final ascent to Uhuru Peak. Many climbers want to give up here, but try to grab your final energy and make it to the top. Our guides will do anything they can to motivate you! Obviously, if you are experiencing severe altitude sickness, you should descend immediately. Inform your guide, he’ll know what to do!

Weather conditions will determine how long you’ll be able to stay at the summit, combined with the fact that you have to get back to Mweka camp in time. But don’t worry, you’ll get enough time to realize what you’ve just achieved, and fully enjoy the moment, your moment standing top of the largest mountain in Africa!

You’ll walk back to Barafu camp to pick up the rest of your gear and from there on continue to Mweka camp. For the descent, which takes another 5-8 hours, we strongly recommend to use trekking poles. You’ll have a good night’s sleep at Mweka camp, and be able to enjoy the fresh air full of oxygen!

Hiking time: 6-8 hours up to Uhuru peak, followed by 5-8 hours down to Mweka camp

Habitat: Glacial zone and all the previous zones

Today you keep walking to Mweka gate, which – even though you’re probably exhausted – is a pleasant walk. Once you get there, you get to sign your name into a register, and receive your summit certificate – a green one for those who reached Stella Point, and a gold one for climbers who made it all the way to Uhuru Peak. The day ends with a 1 hour drive back to Moshi, and a well-deserved night in a comfortable bed.

OUR OFFER – PRICES AND SERVICES

Prices for this climb depend on the size of your group and are as follows:

For this tour, we can try to join you with other guests to form a group. Let us know you want a group tour whilst booking and we will contact you with possible dates, prices and options as soon as possible. Or check out our current open groups to see if there’s an option that suits you.

Please contact us for different group sizes or groups including children, or if you wish to add extra options.

The cost of your climb explained

Underpaid porters that work in bad conditions are a sad reality in Tanzania. We aim to do better, by paying all our crew members a fair salary, and making sure they can work in respectful conditions. Our tours aren’t the cheapest on the market, but every extra cent goes towards creating ethical working conditions for our crew members.
Read more
The following services are included in our package:
This package however doesn’t include:
Book this tour or request more information

The highest mountain in Africa comes with a few risks. Altitude sickness is probably the most important and dangerous one. Read these tips to avoid it. 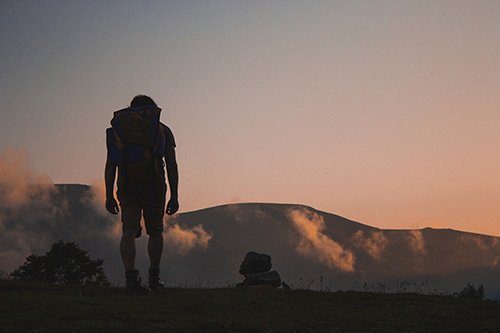 Make sure you don’t forget your socks or any other important item on your way to the ‘Roof of Africa’. Check out our complete Kilimanjaro packing list and get packing!

Thinking about climbing Kilimanjaro but not sure when to go? We give you all the necessary information to help you decide when is the best time to climb Kilimanjaro.
Read all our practical tips and information 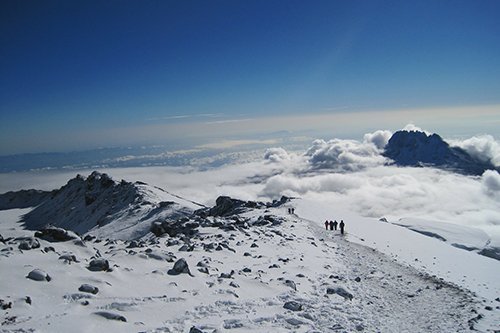 Considered the ‘easiest’ way to the summit, with a soft ascent in general, accessible paths and accommodation in huts, Marangu route is ideal for less experienced climbers. Available as a 5- or 6-day trip, with an extra acclimatization day to increase your chances of making it to the top. 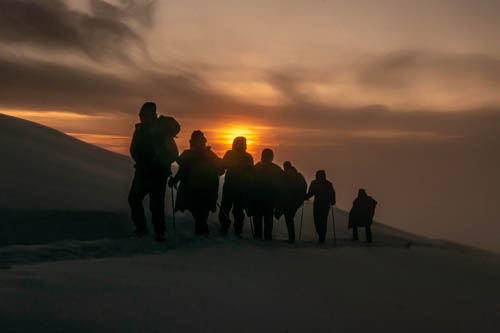 Beautiful, remote and unspoilt, Lemosho route is one of the longest routes leading to the top of Kilimanjaro. It partly follows the same trail as Machame route, but offers more chances of seeing wildlife, and will take you over paths only a handful other climbers choose to follow.

Like this page? Save it for later on your social media or share it directly with your friends and family!

Please leave a message through our contact page, send us an email at hello@mawenziadventures.com or whatsapp us on +255 767 235 007.

Join a group to make new friends and save some money! Have a look at our open groups here.